I am able to set up a React webapp that uses auth0 to authenticate. Yay! This webapp is running locally at localhost:8000, and has a route “/callback” to be called by auth0 after the user logs in.

So, in my Auth0 dashboard for this application I entered “http://localhost:8000” in the box for “Allowed Callback URLs”, “Allowed Web Origins”, and “Allowed Logout URLs”.

When I login the route at “localhost:8000/callback” does get called! Yay!

Can someone please help me understand what is the correct way to do what I’m trying to do?

Can you expand on what you are trying to do with the server ping to lh:3000? It sounds like you are expecting auth0 to send a get or post request to an API after successful auth, but that wouldn’t work here.

Yes, I am expecting the server to ping to lh:3000. That seems to me to be the most logical way for things to play out. Is that not how auth0 works?

How is my server supposed to be informed of the logged in user and their token so that I can authorize client requests with it?

I am expecting the user to be sent to auth0 from the front-end web client, then when auth0 is successful I would like it to send that success message sent to another server and then redirect back to the frontend.

Is that not the normal way?

Maybe it’s an odd case that my front-end is hosted from static files and my backend is a totally different server altogether?

What is the recommended flow? thanks!

Typically your client side app will make requests to your server (API) with the user’s access token. Take a look at this doc: 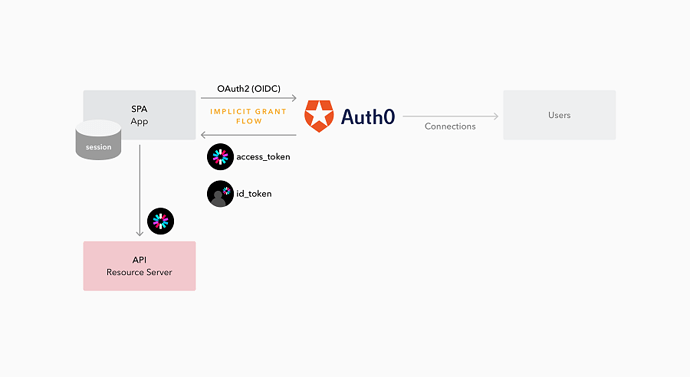 Explains the architecture scenario where a Single-Page Web Application (SPA) talks to an API using OpenID Connect (OIDC), and the OAuth 2.0 Implicit Grant Flow, to authenticate users with Auth0.

Hmm that diagram would seem insecure to me because then as an attacker if learns a user’s id_token and spoof the domain can’t I then tell the server that a new access token was generated and start sending requests?

I’m not sure if I fully understand your question. If an attacker learns the user’s access token then yes, they can make calls against your API as if they were the user. This is inherent to stateless bearer tokens, and the OIDC protocol. Protecting tokens is paramount.